Italy has said all shops except pharmacies and food outlets will be closed in response to the country’s coronavirus outbreak as the death toll from the diseasein the country jumped sharply in the last 24 hours.

A top Italian doctor said intensive care wards should place an age limit on beds as a way of prioritising medical resources amid the deepening crisis that has seen cases in Italy rise by 196 to 827 today.

Prime Minister Giuseppe Conte announced the latest wave of restrictions in a dramatic appeal to the nation that came as the country of 60 million battles its biggest crisis in generations.

Conte said in his nine-minute evening prime time address to the nation: ‘Thank you to all Italians who make sacrifices. We are proving to be a great nation.’

Italians have watched ever tighter restrictions slowly eat away at the very fabric of everyday life as a government decree on Monday stopped non-essential travel between cities and banned public gatherings.

The existing clampdown on public gathering and basic travel had already emptied streets and shuttered everything from churches to restaurants.

It comes as total confirmed infections in Europe rose to 23,339 with 951 deaths, according to a new tally which is compiled from official sources.

In Italy, the number has risen to 12,149 cases with 827 fatalities. More European countries are reporting their first deaths of people with the new contagion. 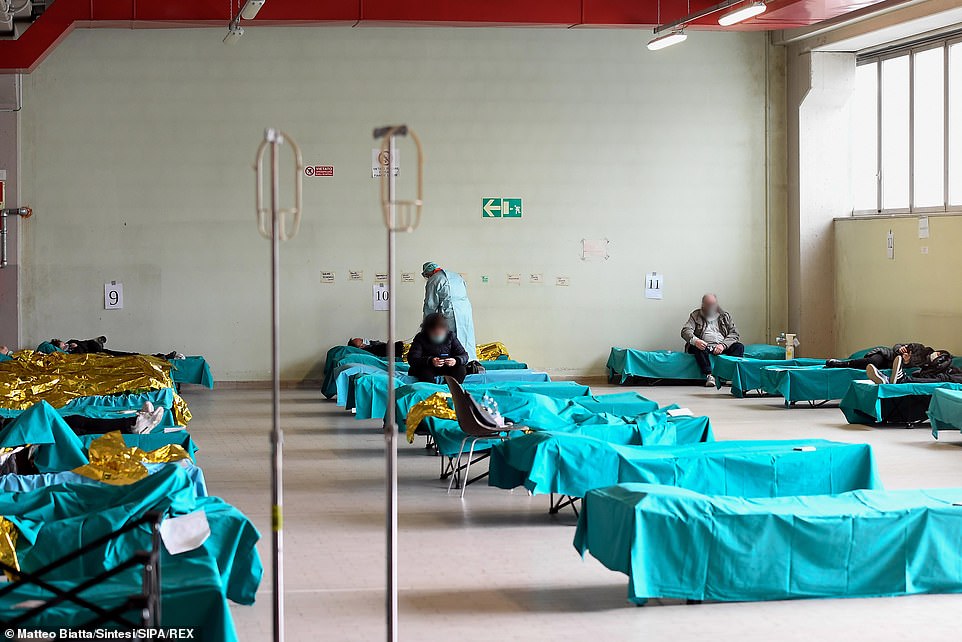 A coronavirus emergency checkpoint and triage point at Civile Hospital in Brescia, Italy. Cases in the country have jumped sharply in the last 24 hours 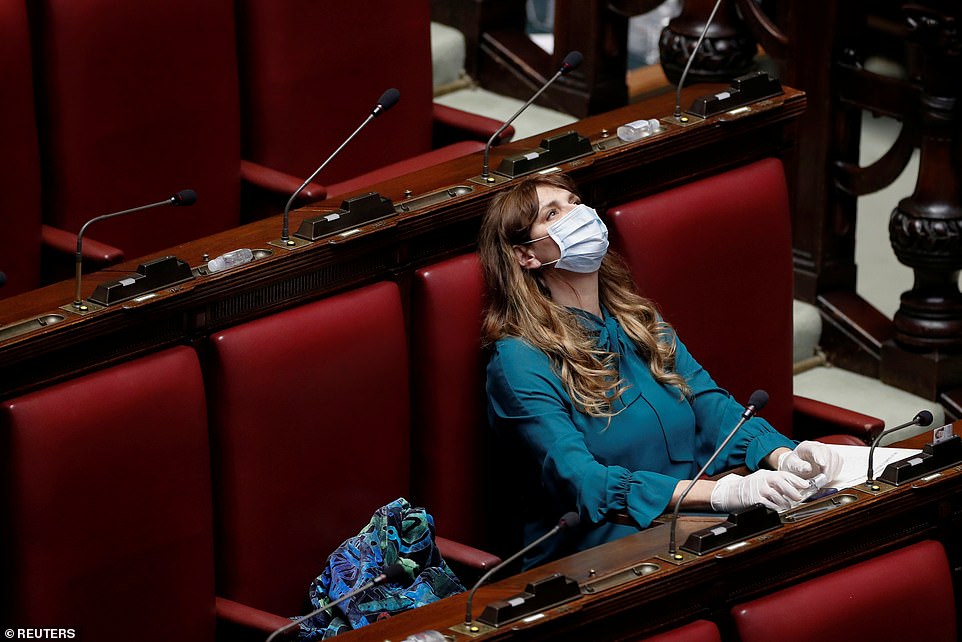 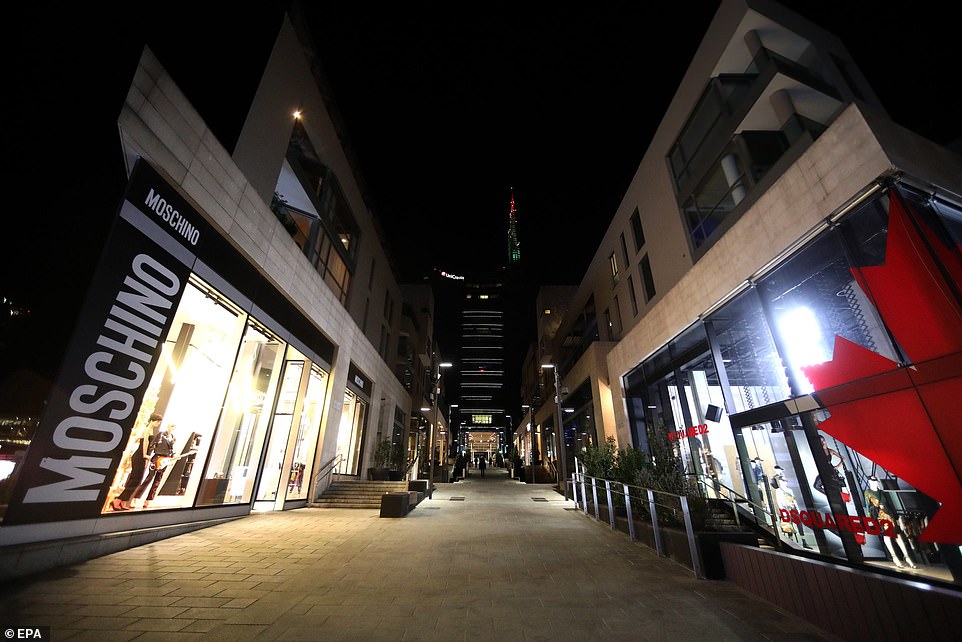 Como street, one of the traditional gatherings of the Milanese nightlife, is deserted today as the country went into lockdown and all non-essential shops were closed 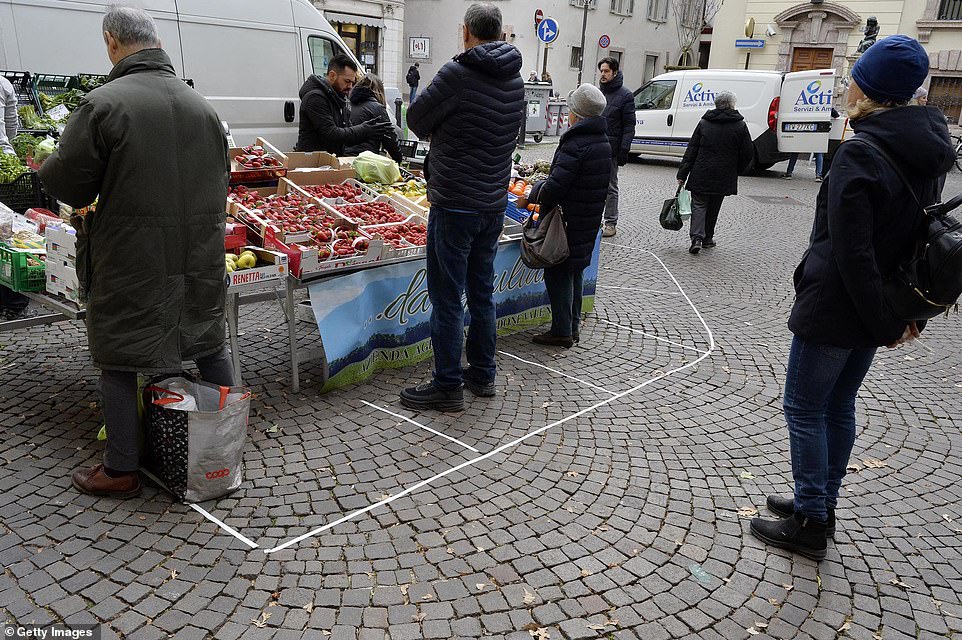 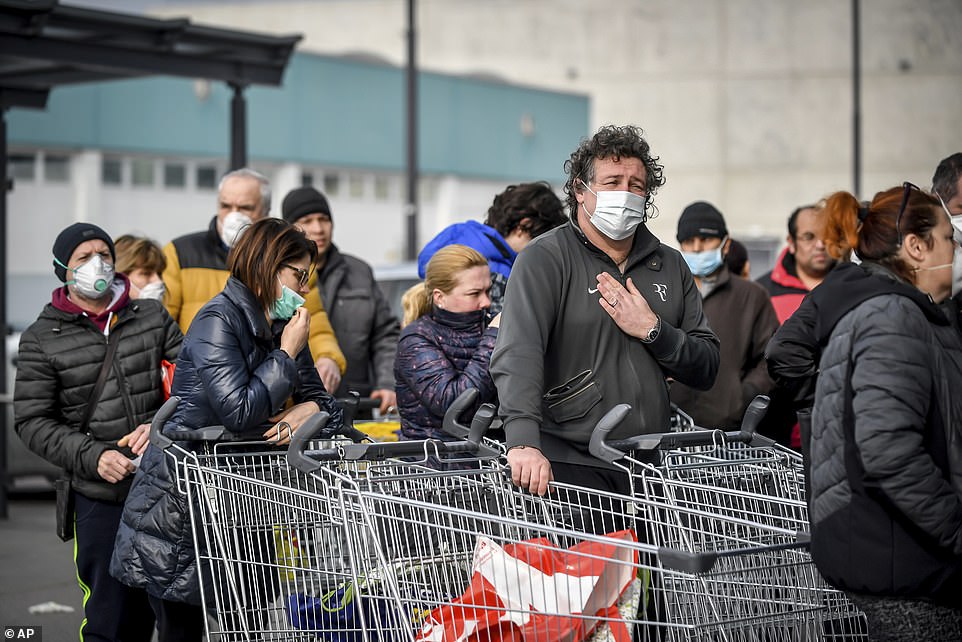 People wearing sanitary masks as they queue outside a supermarket in Casalpusterlengo, in northern Italy, today 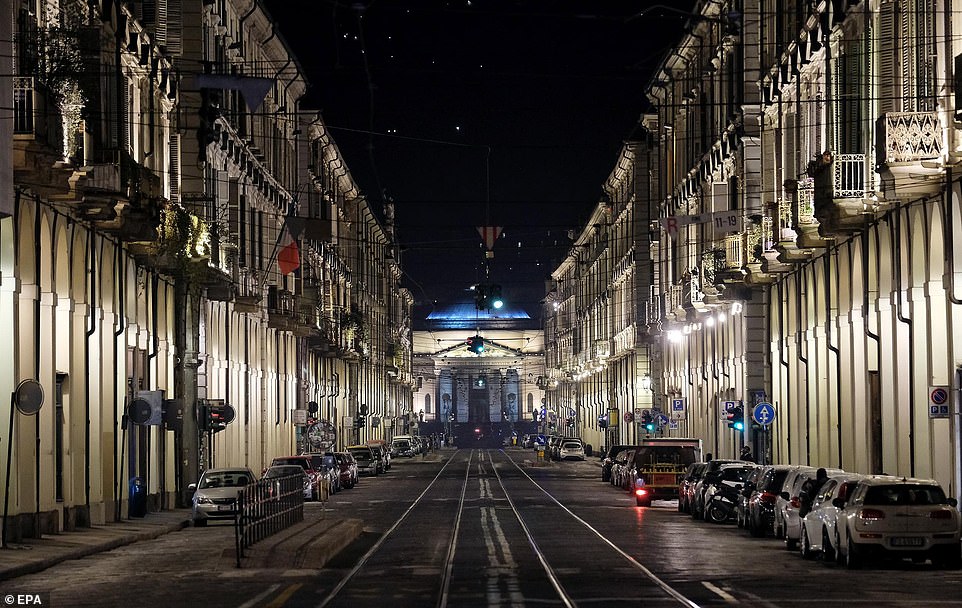 An empty street during the coronavirus emergency lockdown in Turin. Italian Prime Minister Giuseppe Conte announced on Monday the extending of quarantine measures to the entire country 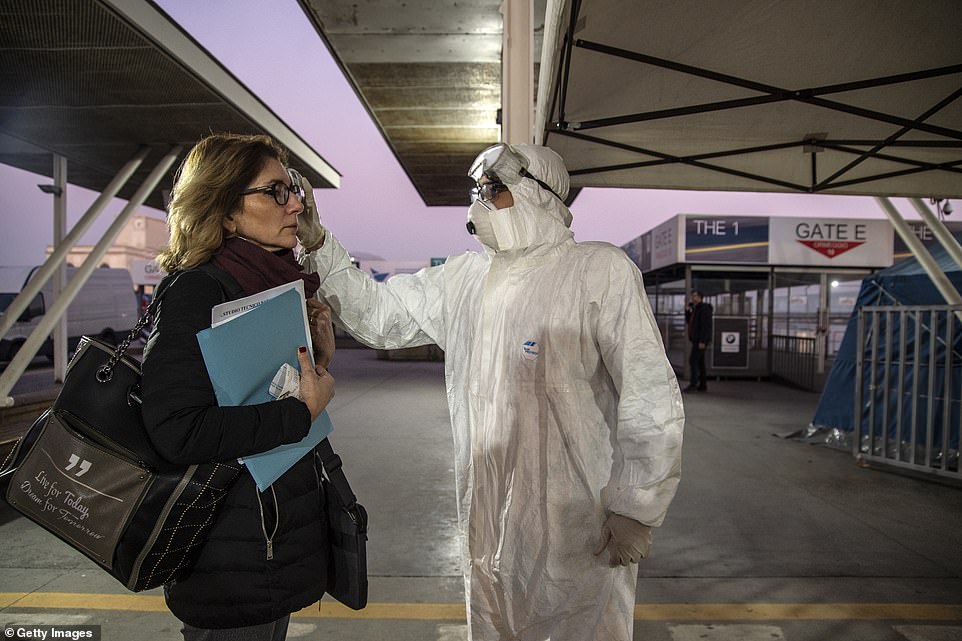 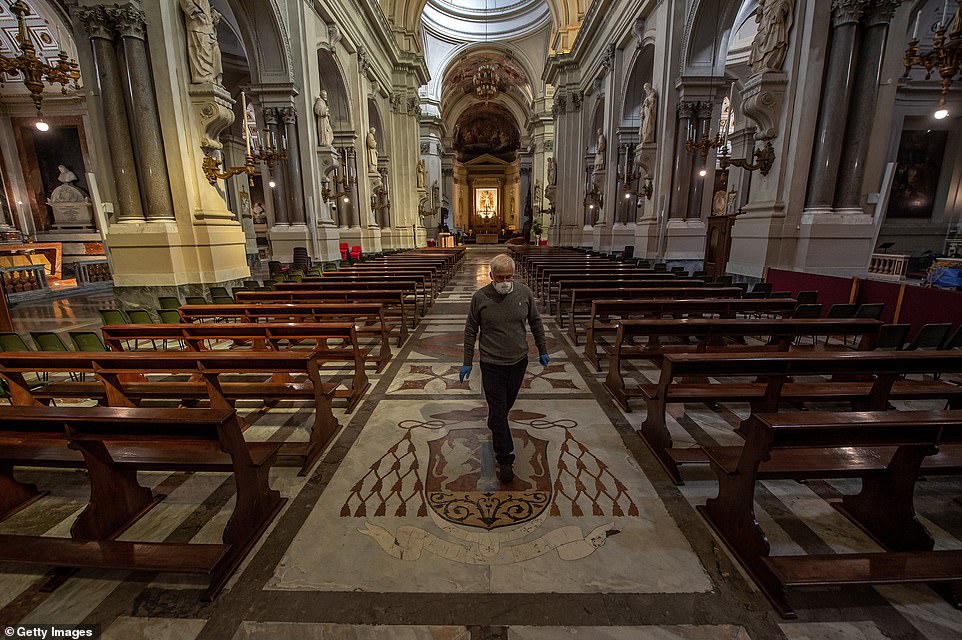 The empty Palermo Cathedral in Palermo today. In Italy a rise in cases of 31 per cent was reported today by the Civil Protection Agency

In another development top doctors suggested that rather than admit patients on a ‘first come first served’ basis, hospitals should swap to ‘catastrophe medicine’ guidelines – typically used in war zones and during natural disasters – where those with the greatest chance of survival are given priority.

If a limit on beds is implemented it could mean elderly patients with no signs of coronavirus being turfed off ICU wards to make space for younger patients who have longer left to live.

The guidelines should apply to all patients needing intensive care treatment and not just those suffering from coronavrius, according to guidance published this week by the Society of Anesthesia, Analgesia, Resuscitation and Intensive Care (SAARI).

In Sweden the death of an elderly woman who had been in intensive care represented the first virus-related death for the whole Nordic-Baltic region.

Denmark’s Prime Minister Mette Frederiksen announced today that the country will close all kindergartens, schools and universities for two weeks.

On Thursday Saudi Arabia temporarily suspended travel of citizens and residents and halted flights with several states due to coronavirus fears. 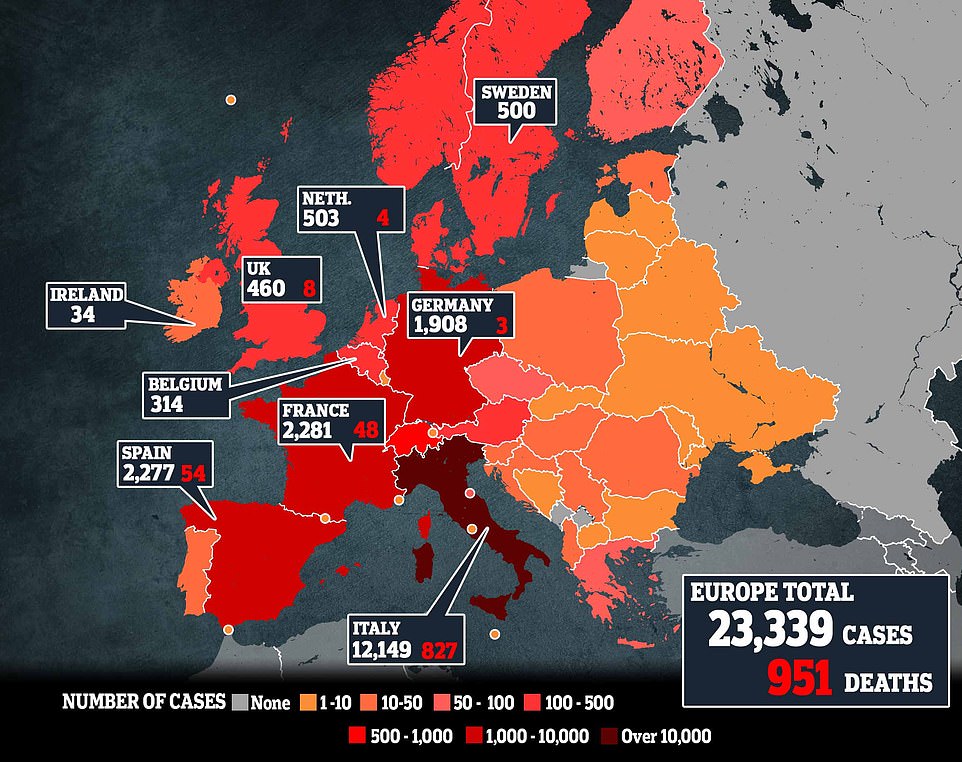 Coronavirus has swept through Europe after a major outbreak in Italy, and is now one of the worst-affected regions outside of China 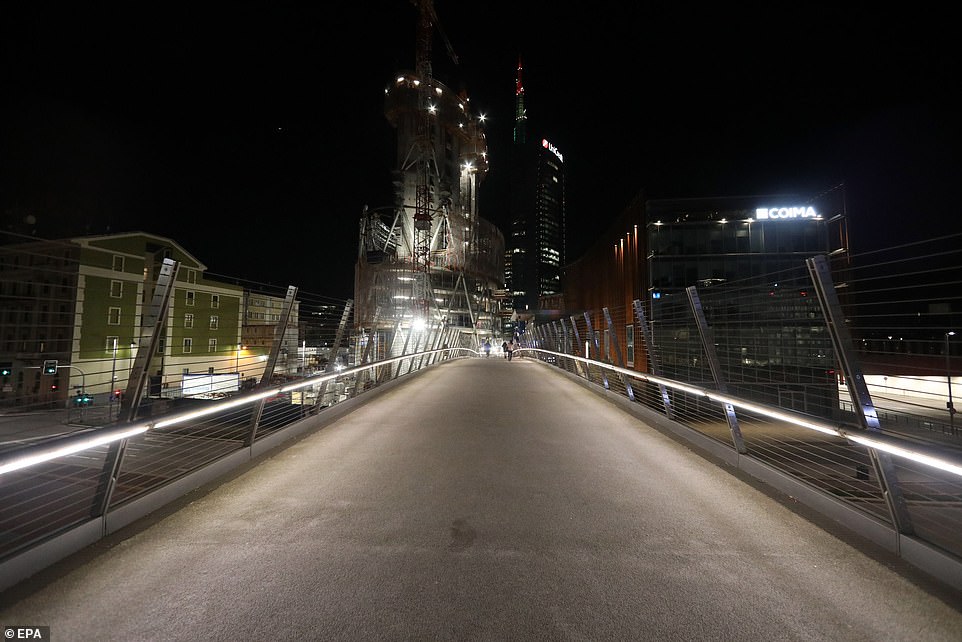 A deserted Melchiorre Gioia street in Milan today. For days, to counter the spread of coronavirus, locals have been obliged to close at 6pm after a strict government decree this week 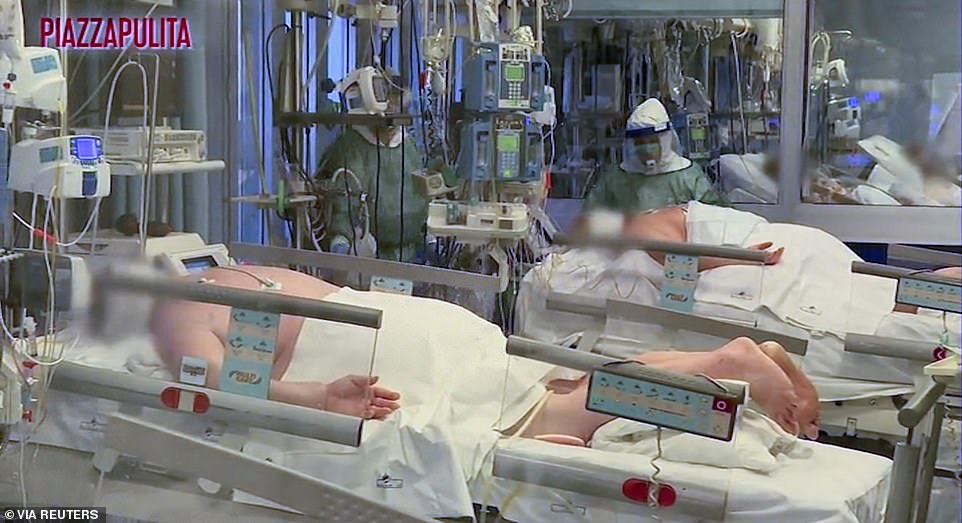 Intensive care wards should stop treating older patients and those with multiple conditions and instead focus on those who have longer to live and better chances of survival if beds run out due to coronavirus, Italian doctors have said (pictured, an ICU ward in Cremona) 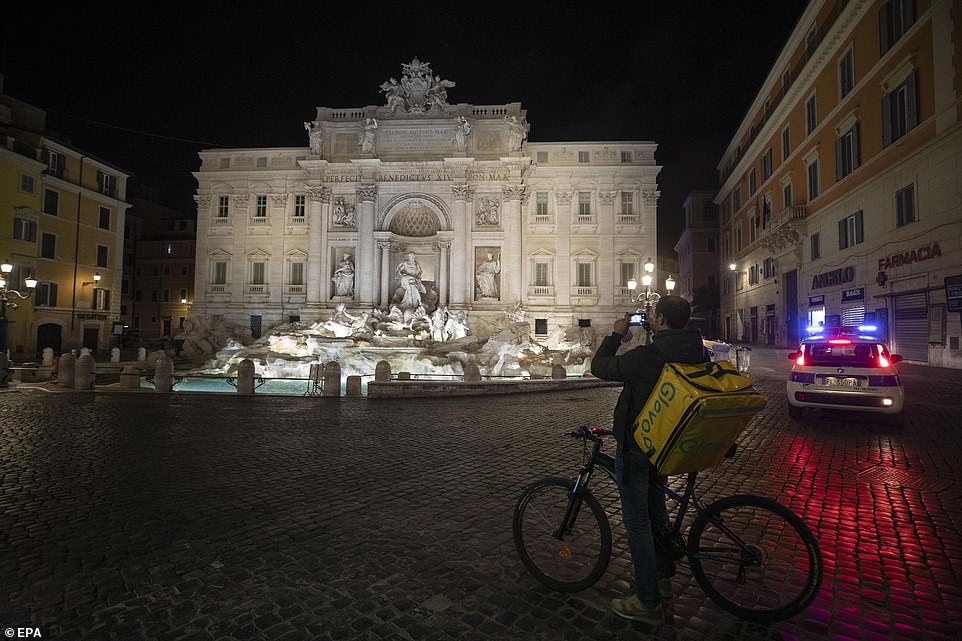 The Trevi Fountain during the coronavirus emergency lockdown in Rome today. The government announced a lockdown 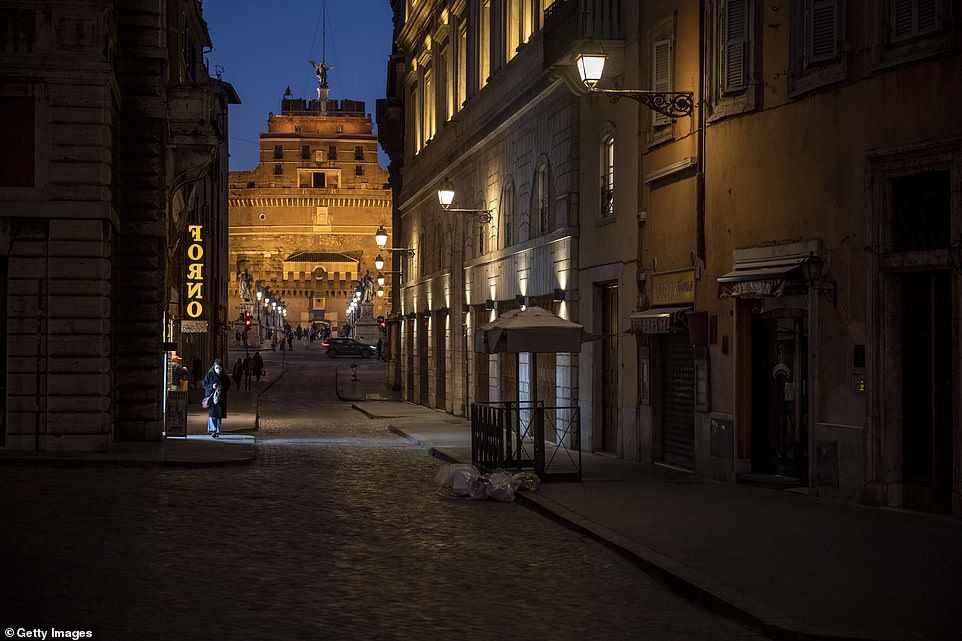 A woman wearing a protective mask walking in a deserted street near Castel Sant Angelo in Rome, Italy, today 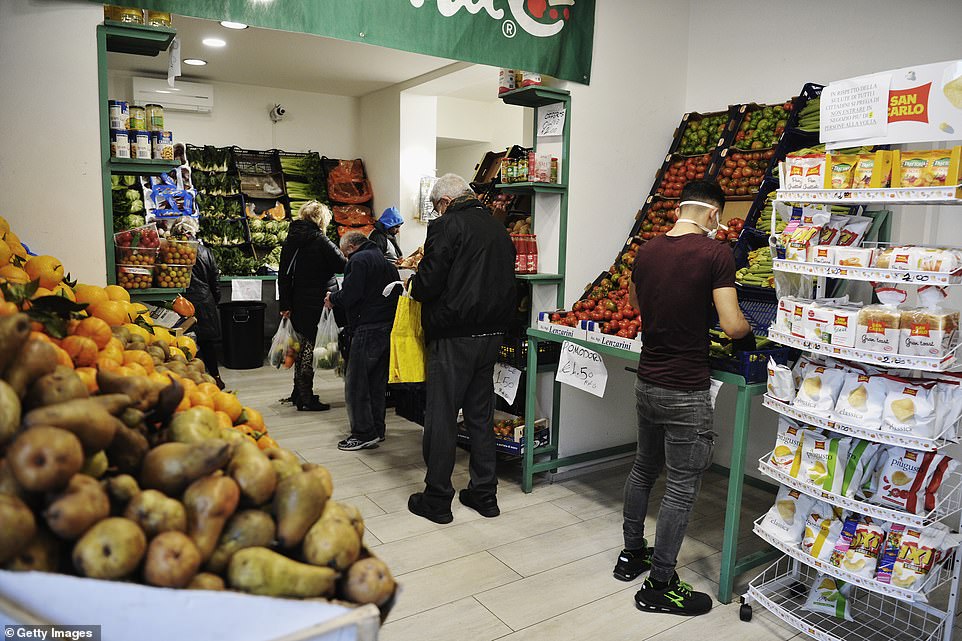 People queuing inside a fruit and vegetable shop standing at least a metre away from each other in a semi-deserted town in Viareggio, Italy, today 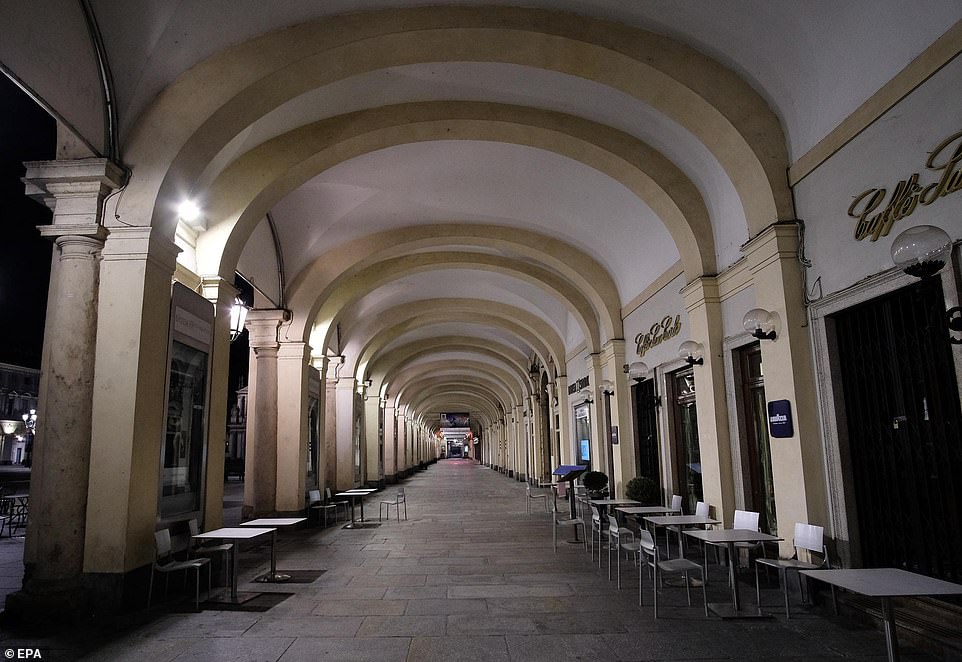 Much of Turin (pictured), Rome, Naples, Venice and Milan were deserted as residents and tourists stayed away from busy hotspots of cities 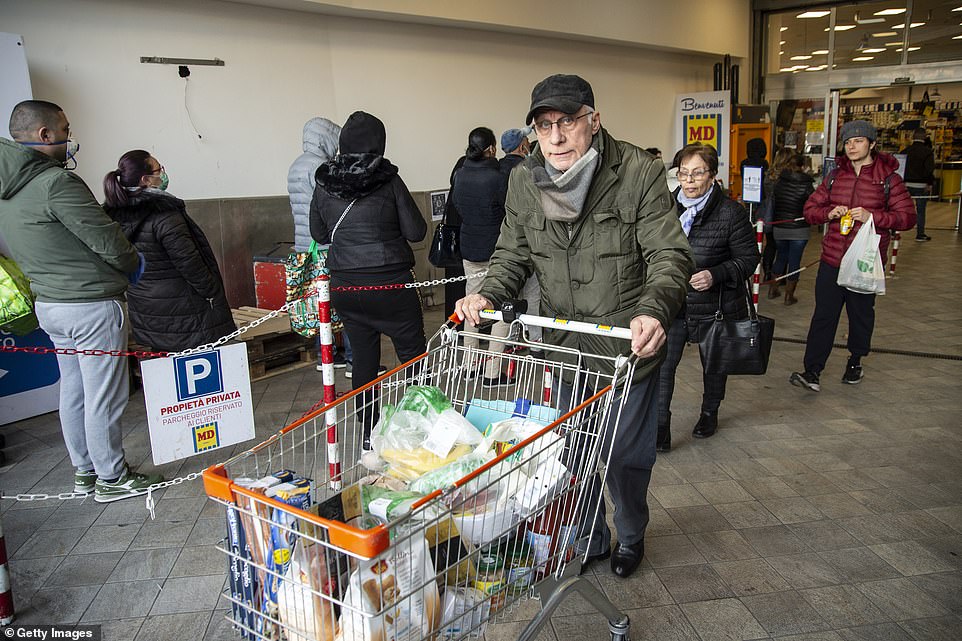 An elderly man with a full shopping cart near a supermarket today in Naples. Many shops saw panic-buying and long queues

Saudi Arabia also suspended passenger traffic through all land crossings with Jordan , while commercial and cargo traffic is still allowed, and the passage of exceptional humanitarian cases.

The decision excludes health workers in the Kingdom from Philippines and India, and evacuation, shipping and trade trips taking necessary precautions. Saudi Arabia has 45 virus cases.

Swiss customs authorities have shut down nine border crossings with Italy, the epicentre of Europe’s coronavirus outbreak, to channel border traffic through seven other sites.

The move announced today follows a decision by Italian authorities to continue to allow cross-border traffic with Switzerland despite adopting strong quarantine measures across Italy.

Neighbours Austria and Slovenia have barred travellers from Italy without a medical certificate.

In Italy a rise in cases of 31 per cent was reported today by the Civil Protection Agency, the largest increase in absolute numbers since the contagion came to light on February 21.

However, the agency said some 600 new cases were confirmed on Tuesday but only reported on Wednesday.

The head of the agency said that, of those originally infected, 1,045 had fully recovered compared to 1,004 the day before. Some 1,028 people were in intensive care against a previous 877.

Italy announced 200 deaths from coronavirus on Tuesday in the largest daily rise yet, as infections spiked to more than 12,000.

One new case was Juventus footballer Daniele Rugani, who become the first Serie A player to test positive for coronavirus today. 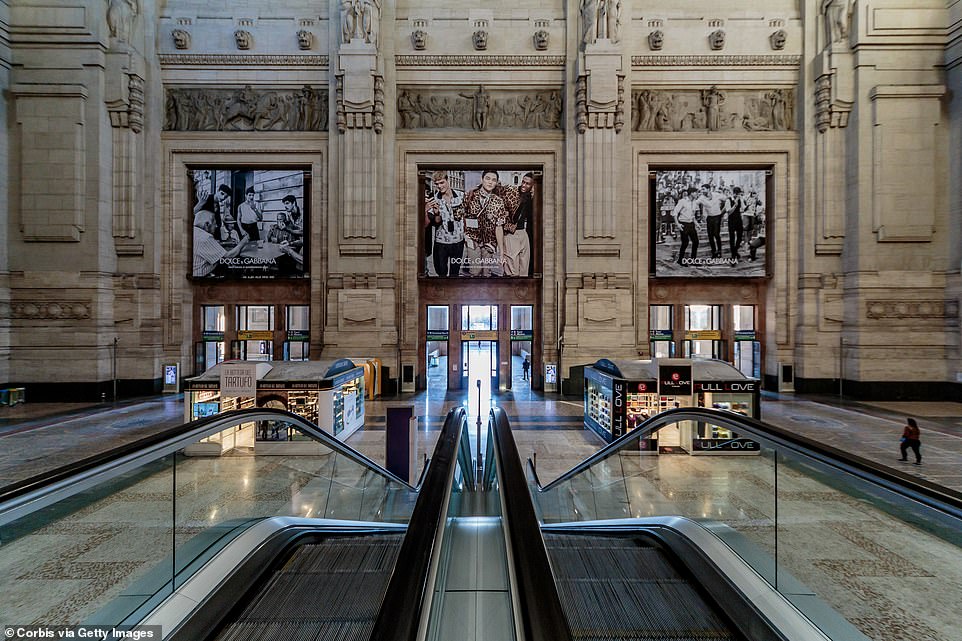 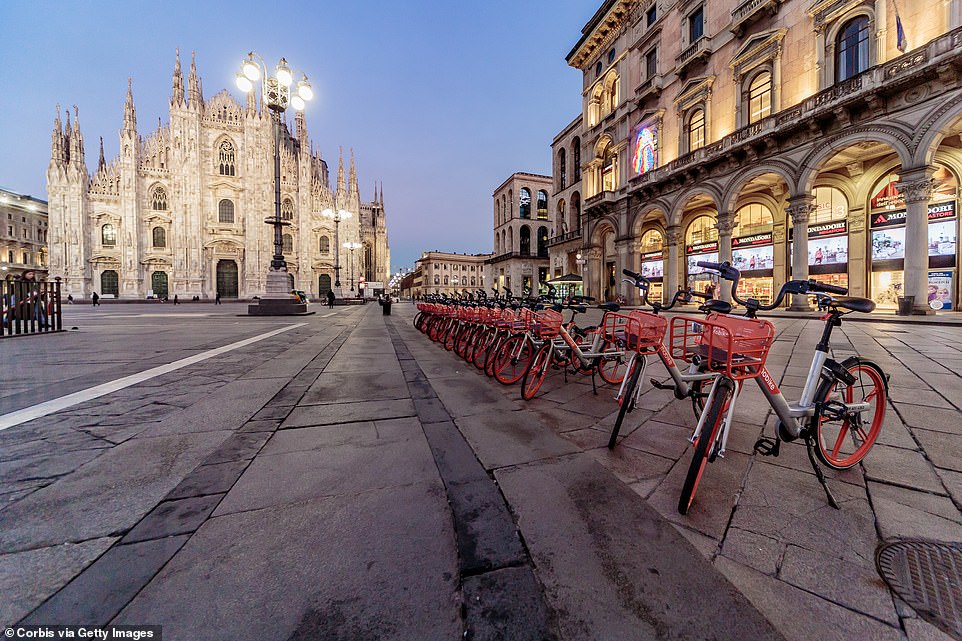 A deserted square outside the Duomo in Milan today. The Italian government has imposed unprecedented restrictions on its 60 million people as it expanded its emergency coronavirus lockdown nationwide 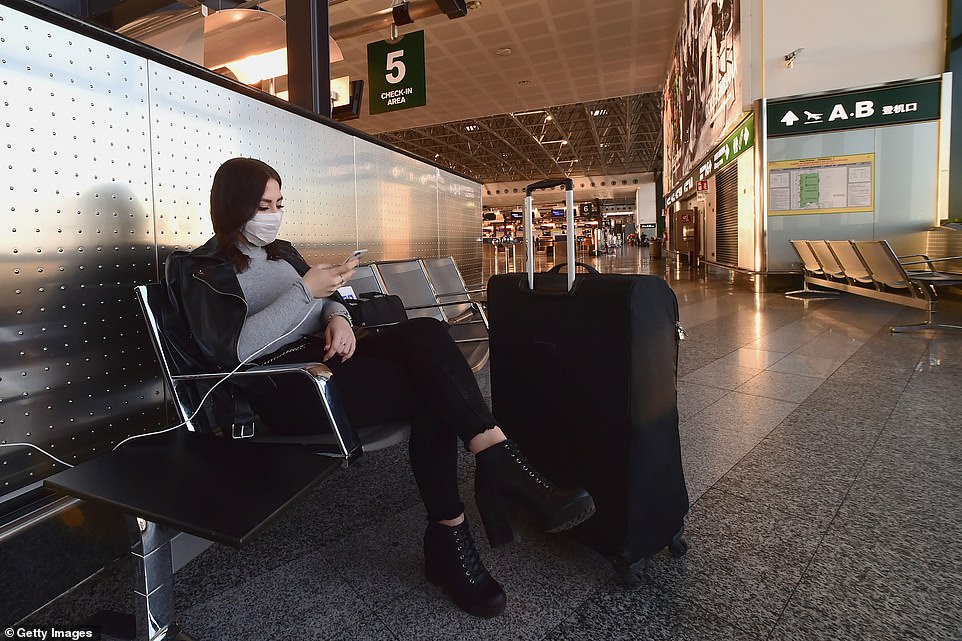 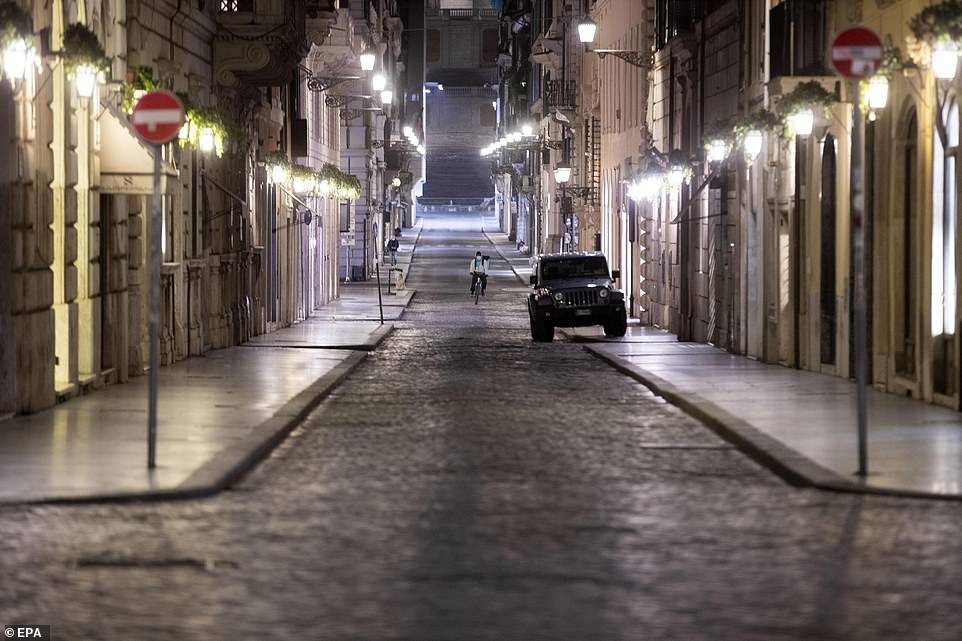 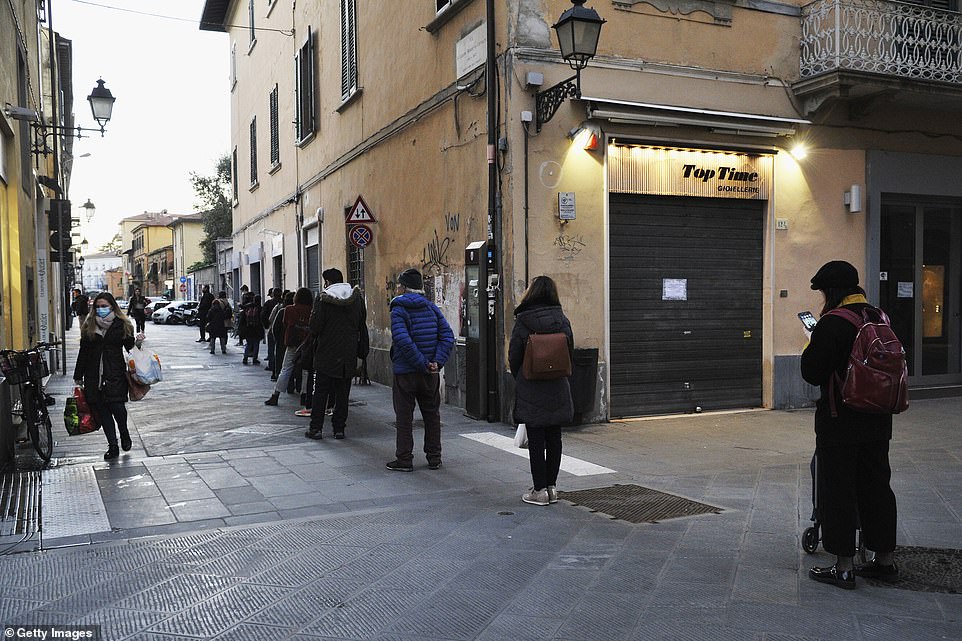 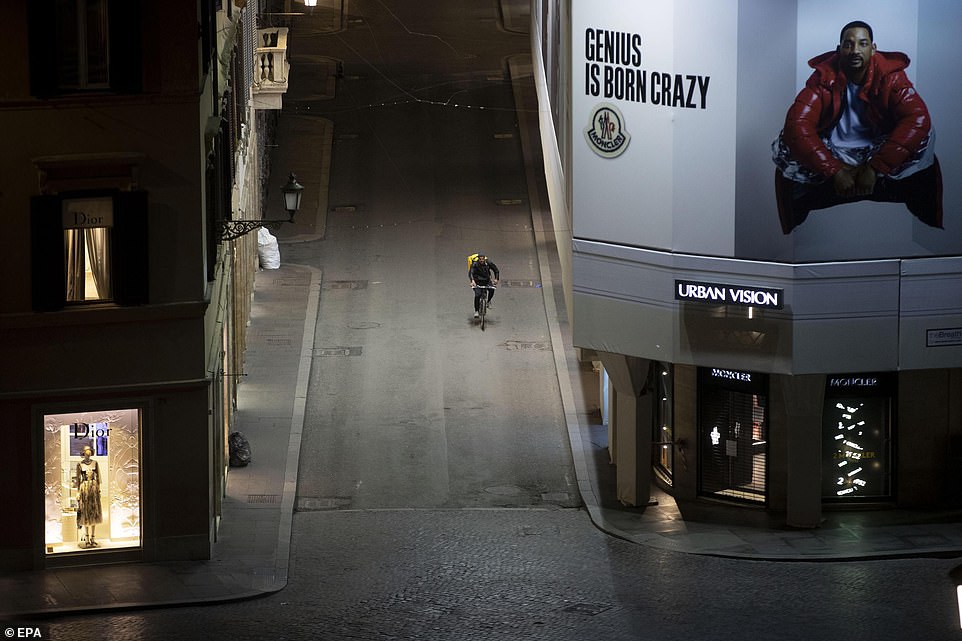 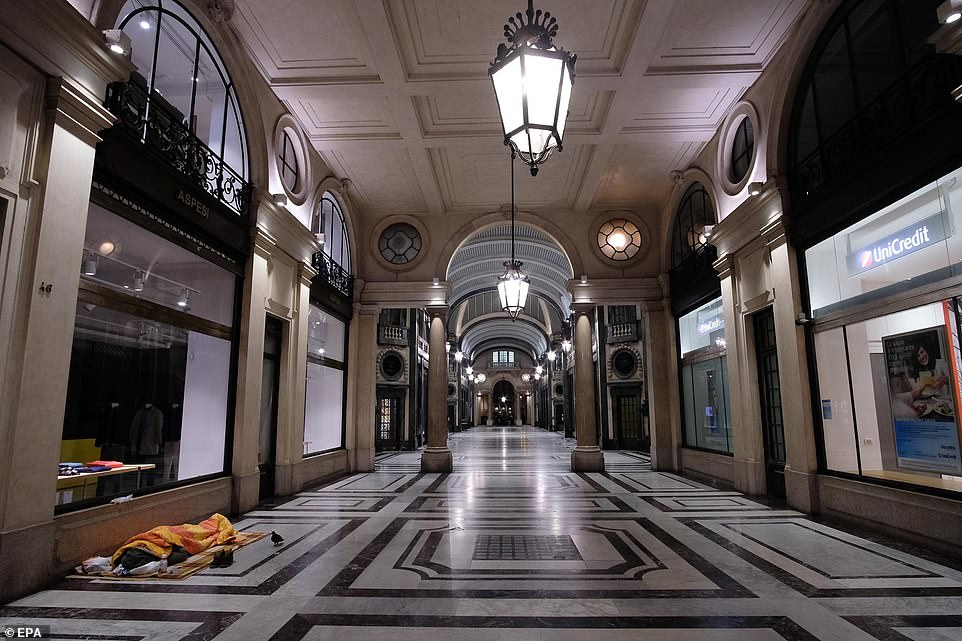 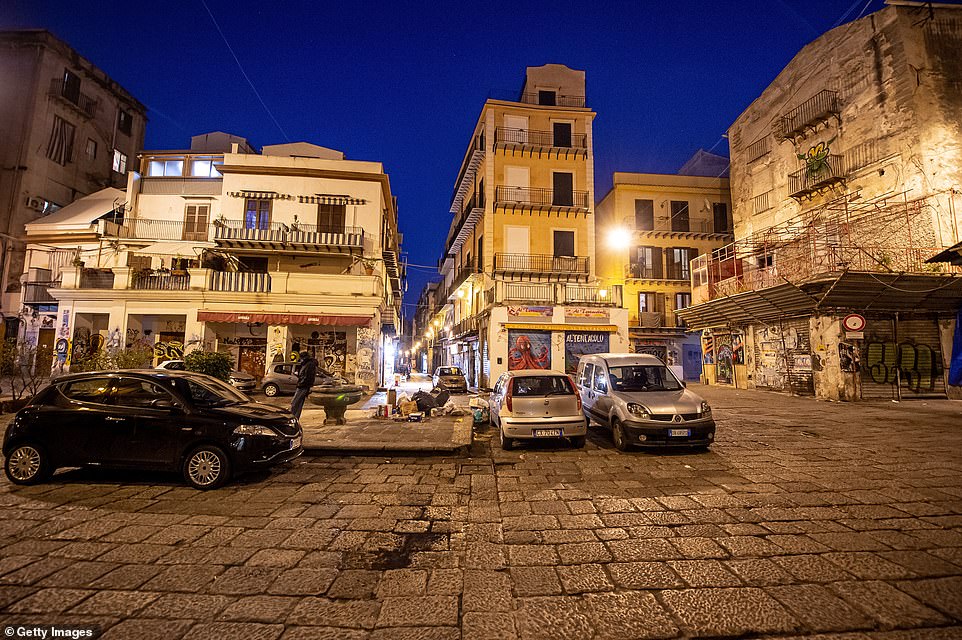 An empty street in Turin today. Pubs, cafes and restaurants will be closed from six in the evening as part of a nationwide lockdown that started on Tuesday

Medics have warned that the UK and US are approximately two weeks away from facing the same scenario.

Spain’s coronavirus cases have surpassed 2,000, with roughly half of them in the Madrid region, where two-thirds of the country’s virus deaths have occurred.

Two more Disneyland Paris maintenance workers also tested positive for the virus. They were diagnosed with the illness just days after going into quarantine when their colleague tested positive over the weekend.

Poland closed all schools, museums and cinemas for two weeks, while Ukraine’s capital city Kiev will shut all educational buildings due to fears of the virus spreading.

Both countries have lower rates of infection compared to the rest of Europe, but Polish ministers said that pre-schools and schools would stop teaching on Thursday.

The entirety of Italy has since been placed on lockdown, with medics in badly-hit regions saying they are struggling to cope with a huge spike in patients.

In a booklet on coronavirus published on Friday, SAARI lays out its recommendations for a worst-case scenario.

While all efforts should be taken to ensure everyone gets care, doctors say it is likely that multiple hospital will be stretched beyond their limits ‘in the next few weeks’.

Around 10 per cent of coronavirus cases in Italy have so far developed serious complications, they note, requiring extensive treatment with ventilators which are in short supply.

In the event that they run out, SAARI says: ‘It may be necessary to place an age limit on admission to intensive care.

‘This is not a value judgment but a way to provide extremely scarce resources to those who have the highest likelihood of survival and could enjoy the largest number of life-years saved.’ 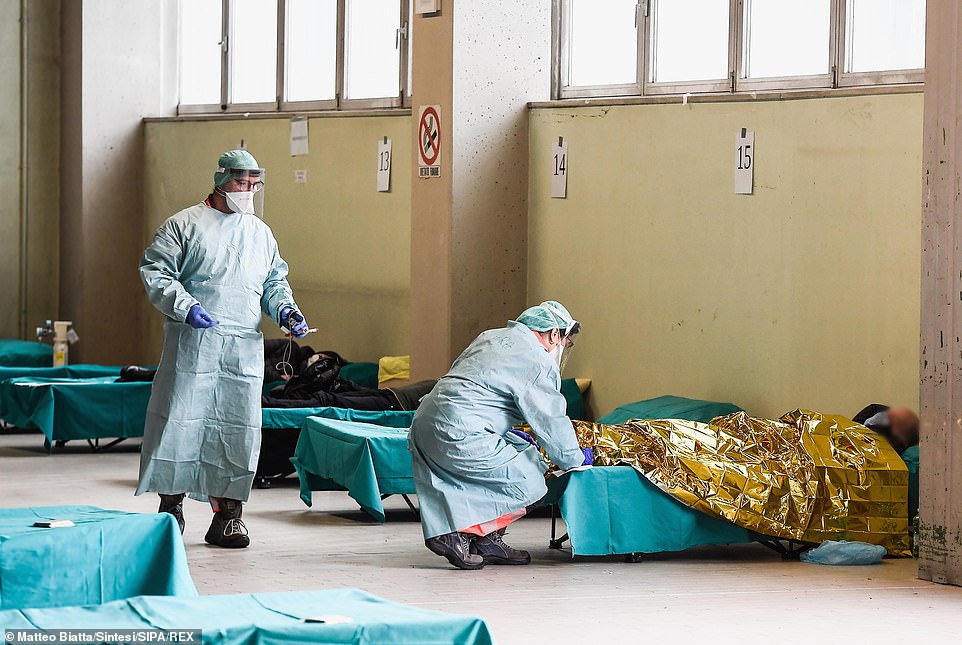 Hospitals may need to stop admitting people on a ‘first come, first served basis’, medics say, and instead treat those with the best chance of survival (pictured, an emergency war in Brescia, Italy) 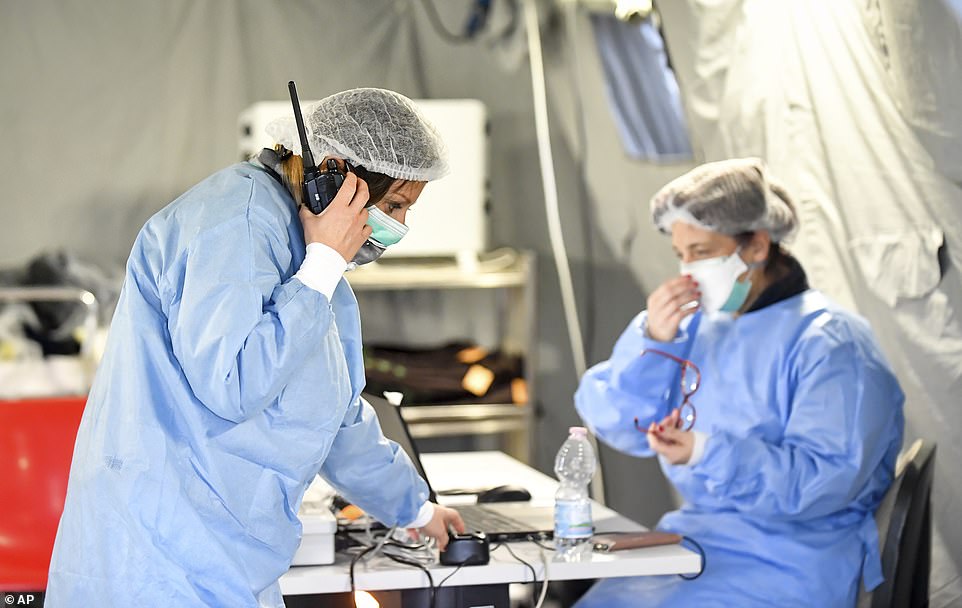 The guidelines should apply to all patients and not just those suffering from coronavirus, medics said (pictured, paramedics in an emergency medical tent in Cremona) 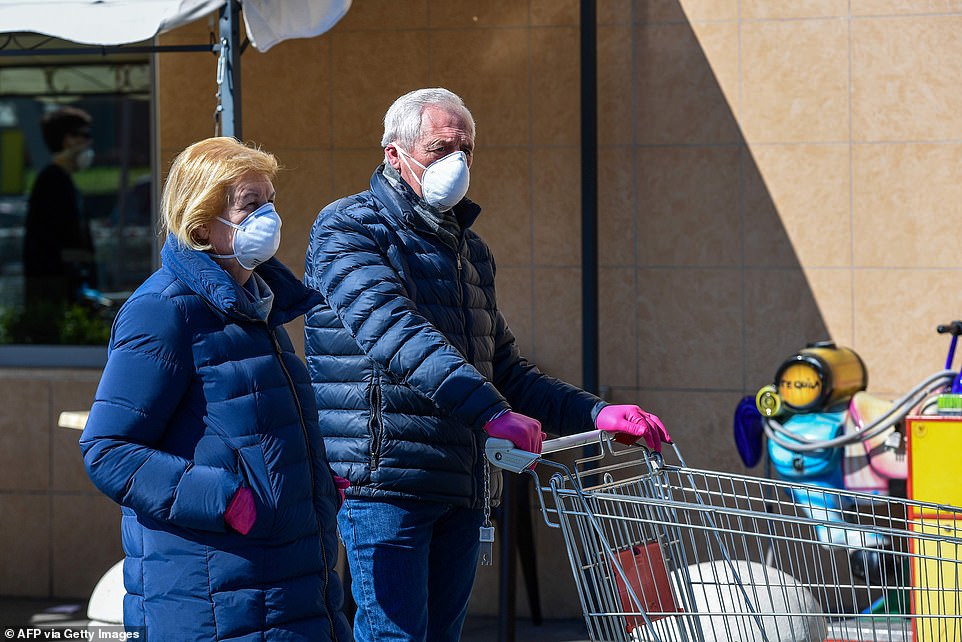 Residents wearing a protective mask wait to do their shopping outside a supermarket in Codogno, southeast of Milan.

Doctors should also take into account how many other conditions patients are suffering from when deciding whether or not they deserve access to intensive care, medics say, and not simply base their judgement on age.

They warn that this will lead to an increase in deaths from people who are not suffering directly from the virus, but who can no longer be treated.

The guidelines have not yet been adopted, but provide a blueprint of what Italy could do should the situation spiral out of control further.

On Tuesday, the World Health Organization officially declared coronavirus a pandemic after the number of patients struck down by the killer infection across the world surpassed 112,000 and the death toll neared 4,500.

The boss of the UN agency said it was ‘deeply concerned by the alarming levels of spread and severity’, with outbreaks continuing to spiral out of control.

Biden Declared ‘Healthy’ and ‘Vigorous’ After His First Presidential Physical